LEGO Guy is a minor character in Adventures of Super Luigi. He is played by Gavin.

A LEGO figure with armor.

LEGO Guy appeared in episode five when Super Luigi and Fire Mario were giving out presents for Dobi. The LEGO Guy was one of the presents! He didn't agree for Fire Mario to give him to Dobi as a present, and was scooted away when Dobi didn't want him. 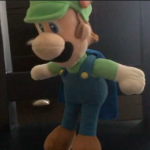